I trust people's freedom and freedom of speech. I want to say that whatever you want to say without any criminal offense is abusive. But in my opinion, abuse is the last weapon of humble people that they can not understand or apply. It's his mental dilemma that he can not control himself. If someone slaughters him, then let him be cursed in response to his level. My personal beliefs, the Bengali nation fosters the culture of humiliation. They get the most pleasure from neighboring quarrels. Many urban people enjoy the fun and ridicule the villagers. They feel distorted and distorted by the human beings, or they are too small.

Vietnamese soldiers who raped women in Vietnam during the war, after the war, raped women destroyed the child. And they did this because they did not praise the babies as they grew up in the womb. In 1971, many of our mothers who had been raped gave birth to a healthy baby without understanding them. I remember that when we see people of Pakistan praising or distorted and violent tastes around us today. There is a class of Bengali people who laugh at crime like rape. Or try to legitimize rape by rape or rape. To them, Begum Rokeya, Sufia Kamal and Taslima Nasrin are a prostitute. In this case, some of the poets of the poets, who also saw some bad words, sing the same song.

Rape scenes in the dark era of Bangla movie were shown in such a way that sexually disturbed Bangladeshi people saw such a distorted sex. And a generation has seen it grow. However, I think that women and women in street are talking about poor talk or rape with their eyes due to lack of family education. Repeat virtual events of the same event also happen. In this case, to send hi, hello, sex or nude pictures to the inbox or ask for a picture of its nude, to a common beparan boy. And when you do not get it out of the end, some of the * nakhi * gi or some f bardi also slap Even after failing in love or after the breakup of relationships, some of the girls also have to listen to abuse.

Feminism is a fight to get a right, but seeing most of our country's elite feminists, it seems that they only do this by collecting their own sugarcane. There is a great difference in the lives and lives of the marginalized women in rural areas with the demand and life of the urban or upper-middle women. In many cases women are female enemies of rural or lower-level families. The same method does not fit all the way. Again, on the question of rights, in most cases they want equal rights but are not interested in taking equal responsibility. Here another side comes in front, everyone speaks against dowry (I am also against dowry or anti-paan) but in danmohar again do not want to reduce the figure. Many such contradictions are observed in Bengali women. 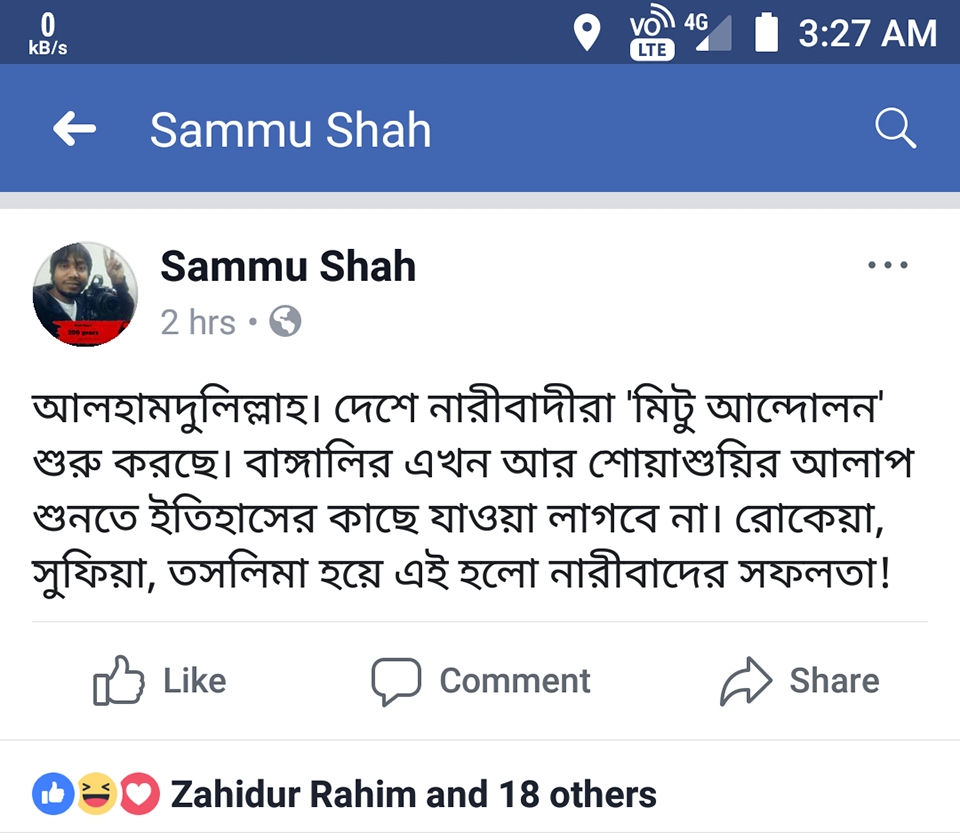 Years ago, in a newspaper news, a Taliban boy from 5-6 years said in a weapon that women are unlawful, and women are unclean. But the child came to the world from the forbidden illegal system several years ago. What has been done in this case is bleeding or brainwashing. Describing these distorted statements or making various crimes by showing the children of the children of the destined child, brainwashing the mind of the imaginary heaven. Ahmad Shafi alias Tantul Sood, who had sabotaged at Shapla Chattar on 5th May, was from a type of idol, which the Taliban used to hold at least 15 years ago. However, this ruling snake is now directly and indirectly supporting and cooperating. There is no ideological difference between Jamaat Islam and Hefajat Islam. Old wine in that new bottle So it means to indulge themselves, killing themselves on their feet. To cooperate with them means pushing the country towards destruction is to push the country towards destruction.

Ahmad Shafi Gong will give reception to the Prime Minister in the historic Suhrawardy Udyan tomorrow. Actually, who does not want to be praised, but the fact is, how rational it is to get reception from fundamentalist or communal groups. There is a matter of politics in Giv and Tech, so who wants to give it here and who wants to take it is clear. The ruling party wants cadre and hefajat want government recognition and immoral advantage I do not know whether there was any secret negotiation agreement between the two parties, but there was something that did not need to be a rocket crystallist to understand. It may be understood that the poet has to make a comparison of the Master, the land of the railway, the textbook to execute them, and the formation of the Digital Security Act in accordance with the blasphemy law, that is, to understand their support. And in the same way, the country is moving forward a little bit towards the Taliban. And Sheikh Hasina's contribution in creating a communal state of Bangladesh is a little too much to be written in history.